Many years ago, when developing wire jewelry techniques began taking over my life, I decided that the best way to keep my brain in “rock mode” was to study a different mineral about every 6 months. I happen to live close to an area of the United States that is rich in corundum, so it became my first subject. Like several other minerals that I will eventually profile, corundum has been known about and used for a very long time so there is a lot of information available.

For just the basics about corundum, Wikipedia has a nice article, Corundum. I like that Wikipedia is an easy way for people to get a snapshot of a subject matter; personally, I prefer good reference books and when possible, being able to actually hold the material in my hand. My article is going to touch on just some of corundum’s amazing highlights. Tip: Click the pictures to view a larger size! 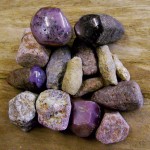 Sapphire and ruby crystals. Some have polished windows to show their star potential, or not. Private collection, Dale Armstrong.

Corundum is a crystalline mineral whose composition is aluminum oxide (Al2O3). It has a Mohs hardness of 9, second only to diamond. Pure corundum is white or silver (depending on whom you speak with) and its trigonal crystals can be opaque, transparent or translucent. When it forms near other minerals or compounds, corundum takes on a spectrum of colors as variable as a rainbow in all shades of orange, yellow, green, blue, violet, white, black and pink. These stones are known in the jewelry industry as Sapphires where any color other than pink can be marketed as a “fancy sapphire.” When the pink color is a deep hue, or a red, the material is known as Ruby. (Special note: when a natural sapphire is an orange-pink color, it carries a special label, nicely explained by my friend David Federman in the article Padparadscha.) Ruby and the blue sapphire have long enjoyed being listed among the top three traditional gemstones (the third being emerald).

What about Corundum that’s not Suitable for Jewelry?

Corundum that is not of gem quality is most often found in metamorphic or igneous rock formations and is most often used to make emery, abrasive grinding products, due to its hardness. Most gem quality corundum is found in alluvial gravel deposits (scraped and left by glaciers) due to the fact that not only is it hard enough to withstand all of that abuse, but also because corundum is very heavy (making it easy to pan for), such as the locations where I search in Mitchell County, North Carolina. Corundum can be found in North America (Montana and North Carolina being the best-known), as well as in Russia, Australia, Thailand and Africa, and a lot of gem quality material comes from mines in India.

Isn’t it odd that these two well known gemstones, whose only difference is their color, are actually the same mineral? Perhaps the separation occurred during corundum’s long history of being used as personal ornaments, jewelry, statues and icons, often chosen by color for a variety of reasons, some of which follow: 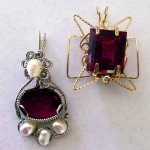 In some cultures ruby was thought to make a being invulnerable, therefore early Burmese warriors often placed thin slabs of ruby under their skin before battle. Ancient people often called any pretty red or reddish pink rock by the name ruby, to the point of some “ruby” artifacts now identified as spinel, a separate mineral group. In 1912, the organization known as Jewelers of America adopted a list they call Modern Gemstones where ruby is associated with those born in the month of July and the constellation Capricorn. Ruby was originally referred to as Ratanraj in ancient Sanskrit, meaning “King of Gems.” Used throughout the ages as a symbol of love, passion and power, ruby is also the stone for both the 15th and 40th wedding anniversaries. 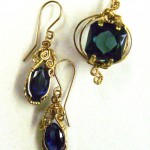 Used as the modern birthstone for those born in the month of September, and under the constellation of Taurus, blue sapphire is also believed to protect your loved one from envy, symbolizes loyalty and represents both the 5th and 45th wedding anniversaries. Early Persians thought that the earth was sitting on a blue sapphire, and that the sky was its reflection. Blue sapphire was also thought to prevent poisoning. Like ruby, in early days about any pretty blue rock was called a sapphire (most often lapis lazuli). Sapphire is traditionally the stone for the 45th wedding anniversary.

In the Bible, both ruby and sapphire are mentioned as being cabochons in the breast plate of the High Priest, Aaron. There are many other Biblical references to these beautiful gemstones, another is the description of a foundation.

More than likely, the two different colors were thought to be two totally different materials. If you are truly interested in learning more details about the history of corundum, I’d like to suggest that you read another article by David Federman, Sapphire where he condenses the history of sapphires into just a few, extremely well written pages. 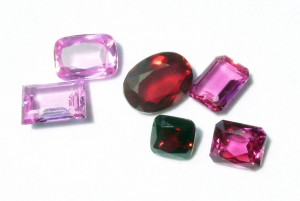 Corundum can be purified and reconstructed into synthetic ruby and sapphire (these stones, though manmade, are identical in chemical and crystal structure to their natural counterparts). There are several methods used today. The first was developed by Gaudin in 1837, of which you can read more in the Wikipedia corundum article linked above. Some people like the fact that they can purchase and own a flawless ruby or sapphire, because even though it is lab grown or made it is still a valuable gemstone, testing out as pure material. There are many other uses for super hard and durable, synthetic corundum besides as a gemstone in a jewelry design, such as the scanning screen at your local checkout register!

Unfortunately, because both natural ruby and sapphire are extremely precious materials, there have been countless controversies about the treatments used to perfect flaws in natural stones, that are often sold as natural without disclosure of the treatments used. 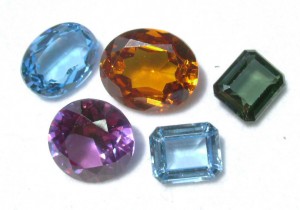 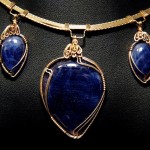 Custom-designed and created in 14kt solid gold for George McCannon, owner of The Old Pressley Sapphire Mine, by Dale Cougar Armstrong.

Many of you are probably thinking, but what about a star sapphire or a star ruby? Well, the basic corundum material is the same in both of these specialty stones, the only difference is the position of included needlelike crystals (rutiles, most often titanium dioxide) that form in corundum. These rutiles are never found in a transparent specimen. If these crystals are situated in an opaque corundum so that there is a center junction, when the stone is oriented properly and cut, the rutiles will reflect light so a “star” seems to float on top of the stone. These stars are not only hard to find, but even more difficult for a lapidary to properly cut showing the stone’s best advantage. Not all natural star corundum stones have exactly 6 points. A star sapphire is known in metaphysical areas as a “stone of destiny.”

Most natural star sapphires used in jewelry making today are mined in India. There is only one recognized mine for blue star sapphires in the United States, the Old Pressley Sapphire Mine in Canton, North Carolina. Just over the mountain from my home, both the Cartier and Tiffany jewelry companies have mined the gorgeous Canton Cornflower Blue in past years. 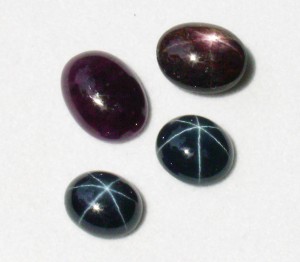 There are a lot of synthetic and simulated stones (often resin, plastic or glass) that represent star sapphires on the market today. During WWII, an Ohio based company named Linde Air Products adopted the process of making synthetic corundum and mass-produced what they named the “Lindy Star” sapphire. From the 1940s through the 1950s, Union Carbide produced a synthetic star ruby, also referred to as a “Lindy.” A true Lindy Star cabochon was extremely popular in making showy costume jewelry then and is considered a collector’s item today. There is one other look-alike that I would like to mention: while shopping, sometimes you will find what appears to be an affordable, natural, black star sapphire, but look closely: it is more than likely a black star diopside – which is the subject of a later gem profile! 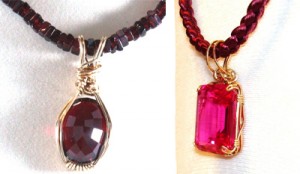 Next Friday’s Gem Profile is on Prehnite. Have you wire wrapped Prehnite before? Send us pictures at tips@wire-sculpture.com and they could be featured!