Do you love Opal? Who doesn’t! It’s a beautiful gemstone.

“Opal is the world’s most popular phenomenal gem. Many cultures have credited opal with supernatural origins and powers. Arabic legends say it falls from the heavens in flashes of lightning” – from Spencer Opal Mines 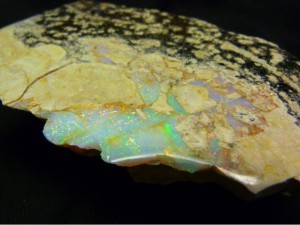 If you are planning on (or thinking about) joining us and our sister company JewelryTools.com  for our 2017 Jewelry Tools Classes at JOGS, we’d like to invite you to join us for a FREE presentation about diversity of the Spencer Opal from the Spencer Opal Mines.

A little about Spencer Opal: 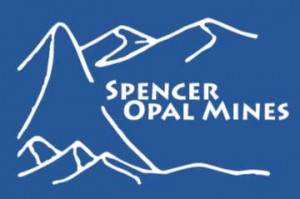 The Spencer Opal Mine, located in Spencer, Idaho, is the largest privately owned gem stone producer in the State, and is the major producer of Opal in the state of Idaho. Opal is the second largest contributor to the total value of gem material produced in the state.. The varieties produced include precious (white and pink), yellow, blue, pink, and common.

At Spencer the precious opal occurs as one or more thin layers within common opal partially filling gas cavities within a rhyolite-obsidian flow. About 10% of the material is thick enough to cut into solid gems; the remainder is fashioned into doublets and triplets. The Spencer Mine is the source of pink common opal and pink precious opal.

Opal is the world’s most popular phenomenal gem. Many cultures have credited opal with supernatural origins and powers. Arabic legends say it falls from the heavens in flashes of lightning

During this FREE presentation – Erin Mortensen, third-generation family member, will share information on everything from triplets to solids, pink to white and everything in between!

Ask questions, and have a hands on experience with the Opal. Plus – receive a FREE take away gift just for stopping by. FREE presentations on either Saturday, January 28th from 2-:2:45pm or Sunday, Feb. 5th from 2-2:45pm.

A few of the Opals from the mine: 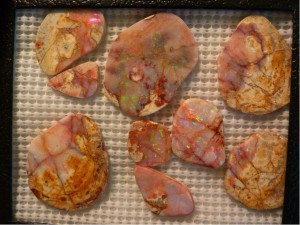 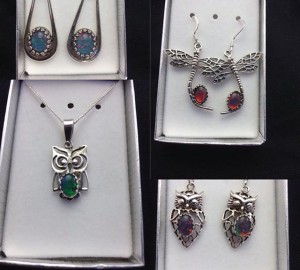 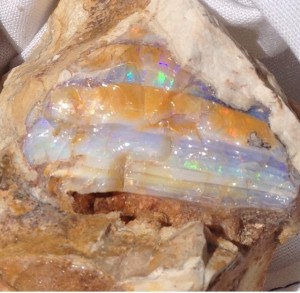 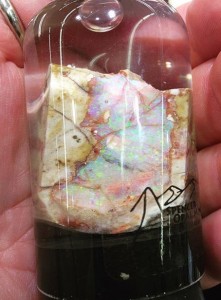 History of the Name Opal:

Reportedly, opal’s name evolved from the Roman word opals from the Greek word opallios meaning “to see a change of color.” The Greek word was a modification of the ancient Indian Sanskrit name for opal, upala, which meant “precious stone.” If one spoke in mixed tongues, then opal would be opallios upala, “to see a change of color precious stone.” As indicated by the derivation of its name, opal has centuries of history as a treasured gemstone. Historically, beliefs associated with the wearing of opal have varied. The early Greeks thought that opals gave their owners the powers of foresight and prophecy, and the Romans adored it as a token of hope and purity. Eastern people regarded it as sacred, and Arabs believed it fell from heaven. In the nineteenth century, superstitions grew about the bad luck or fate that could befall one for wearing opal if it were not the wearer’s birthstone. Today, these superstitions have diminished, but some people still believe it is bad luck to wear opals. Opal has over one hundred variety and trade names, but the list of accepted or commonly used names is much shorter. 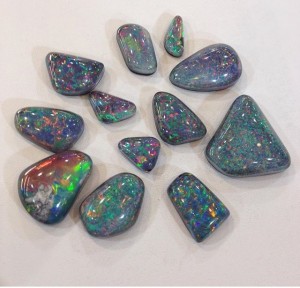 Colors of Opals and Their Value:

Gems are cut from both the precious and common forms, but precious opal is the primary gem form of this stone. There are many varieties of both precious and common opals. The most desired and beautiful form of opal is black opal, which is opal with a dark blue, dark green, or black background with a strong play of color. Next in importance is white opal, which is opal with a light colored body color (white, yellow, cream, etc.) with strong play of color. Next in line is Mexican fire opal, a transparent to translucent orange red form of common opal. If Mexican fire opals display play of color, they are known as Precious Fire Opal. Many precious opals, besides being classified as either black or white opals, are further classified based on the distribution and habit of their play of color. There are also many variety names given to the numerous forms of both precious opal and common opal. 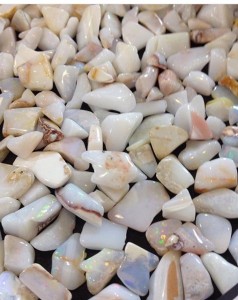 You Can Dig It! 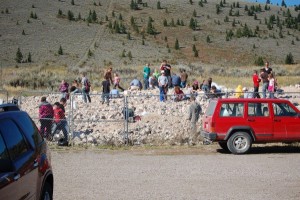 Plan your 2017 Tucson trip around taking a class – or a few – Use the Promo Codes below to save on your class registrations!