How to Make a Round Center in a Spiral

How to Make a Round Center in a Spiral

Have you ever been making a spiral and the middle ends up looking well, less “round” than you imagined?  If so, today we have a great tip to help you create a more “round” center…. 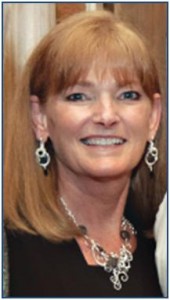 Before getting to the tip on making a round center on a spiral coil, it might be useful to go over a few basics.
It is always a good idea to make a coil charm from different wires so get a “feel” of how each wire behaves. The following steps show how most spiral coils are made, using a flush cut end to start.

Step 1: You can use either a chain nose or a round nose pliers to start the center of a spiral. There are pros and cons for the use of each. Try both to see which works best for you. Each piece of wire used for the charms is straightened and cut 2″ long (flush cut on both ends).

Chain nose pliers: Note: Make sure that the tip of your pliers is very fine to obtain the smallest center loop possible. 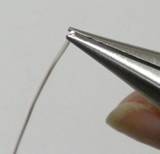 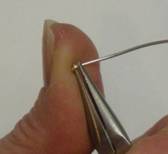 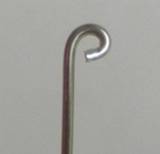 Round nose pliers: Note: The jaws of some inexpensive pliers, and even some expensive ones, have tips that are not the same size.

If you have a pair like this, use the same tip throughout your project. Round nose pliers will not grip the wire very well, but the darker satin finish pliers seem to have more grip to them with less hand pressure on your part than shiny ones. 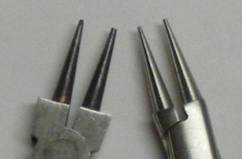 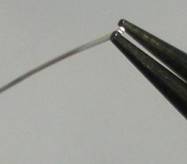 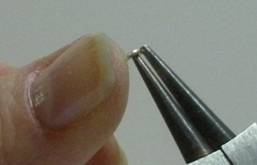 You will find that chain nose pliers give you a better grip on the wire tip, making it easier to curl. Round nose pliers make it easier to make a more than full loop but do not grasp wire tips well. In the next step, you have to continue the spiral. Using chain nose pliers, this is more difficult to do with the small curl you just created.

Continue in this manner until there is ½” of wire left. Note: When soft jaw pliers are new, the surface is more slippery than when they have been used a while. You may have trouble with the coil slipping if you hold it close to the tip of the pliers. It may be easier for you to make the coil closer to the plier hinge. An added benefit is that you do not have to exert as much pressure to hold the wire there.

Step 3: Grasp the tip of the wire tail with your round nose pliers. Rotate the pliers back toward the spiral, creating a loop.

TIP: Because the wire end you start with is flush cut, the center of you spiral coil can become teardrop shaped. There is a way to avoid that. However, this technique should be done only on solid or filled wires, not plated ones. Only a round nose pliers is used for this technique. 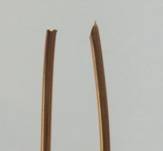 Also, the one on the left took more pressure on the pliers to continue the spiral over the flat end, therefore denting the wire. The dent will get covered up as the spiral progresses, but still can show a bit.