Every so often we have customers share their experiences and their success with us. Today I’d like to share a wonderful article about Ron Stauffer. Ron is one of our WireJewerly.com customers who has found himself through artistic expression. Ron shared this special story with us and also sent us one of his beautiful roses which we fondly display  for all to see and enjoy in our office – Thank you Ron!

Ron Stauffer never considered himself an artist, until now.

Growing up, Stauffer attended the Kutztown Folk Festival every year. Although it was the highlight of his summer, he hadn’t imagined himself on the other side of a vendor’s table. Now, Stauffer has found his place as an artist. This year he displays his handmade copper flowers, glass pendants, twisted wire bonsai trees and other items at the festival.

The Boyertown resident began working with copper about a year ago, seeking something therapeutic to help manage depression that caused him to leave his job as a third grade teacher. ‘I felt useless,” he recalled’ After taking a four-hour introductory ornament making class, he said, “I was hooked.

“This keeps me occupied. It makes me feel like I am productive” Stauffer said he turns to molding copper as a creative outlet and can spend hours absorbed in a Project.

One of his first efforts was a flower. “I thought a rose would be cool.” he said. 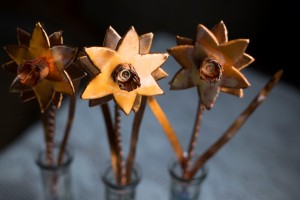 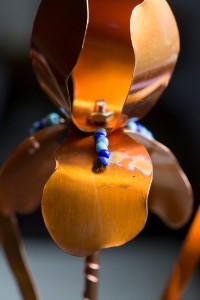 To prepare, Stauffer examined the structure of a real rose. He noted that the flower’s head was made up of about five layers of petals, each decreasing in size. Stauffer determined that he could create a similar effect by using five circles cut from a sheet of copper.

Before shaping the different sized circles into petals, Stauffer heats them using a burner on his kitchen stove top. Just before they get too hot, he plunges the pieces of metal into cold water. This hardens them some, but they remain malleable enough to be shaped into petals.

Stauffer’s first couple of roses did not turn out as he had hoped, but he persevered. Stauffer gave his first successful rose to his mother, who he said is his best friend. 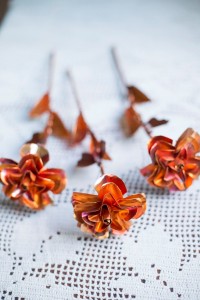 He continued gifting his work to his friends and family and they all encouraged him to sell some of his pieces. Now, he sells the flowers and other work under the name “Ron’s Roses” on Etsy as well as local craft shows and festivals around his area. 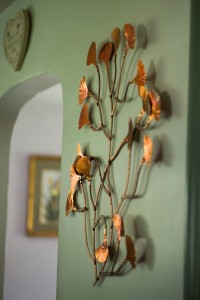 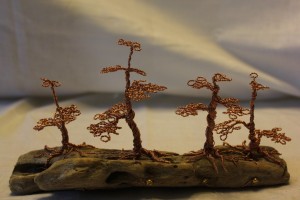 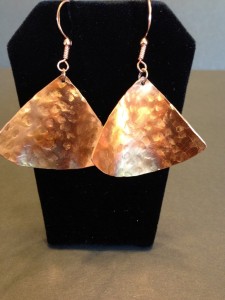 As you can see, Ron has created a host of beautiful projects from the copper sheets. We want to thank Ron for his creative efforts and we hope that you will all be as inspired by Ron’s story as we are!