There are two stones, Aquamarine and Bloodstone that are associated with the month of March. I thought we’d take a quick look at them both today!

Aquamarine, the birthstone of March, has a rich color and has long been a symbol of youth, health and hope. Its mesmerizing color ranges from pale to deep blue and are reminiscent of the sea. A perfect birthstone for March, the Aquamarine creates a beautiful accent to spring and summer wardrobes.

The name aquamarine is derived from the Latin word aqua, meaning water, and marina, meaning the sea.  This gemstone was believed to protect sailors, as well as to guarantee a safe voyage.

The serene color of aquamarine is said to cool the temper, allowing the wearer to remain calm and levelheaded.  Aquamarine is most often light in tone and ranges from greenish blue to blue-green; the color usually is more intense in larger stones.

This gemstone is mined mainly in Brazil, but also is found in Nigeria, Madagascar, Zambia, Pakistan, and Mozambique.

This ancient stone was used by the Babylonians to make seals and amulets and was believed to have healing powers — especially for blood disorders. Bloodstones were believed to be a magical stone in ancient times. Touching the stone simply stopped hemorrhages. Ancient warriors carried with them bloodstone amulets for reasons to stop the bleeding whenever they had wounds.

Bloodstones are also known as stones of courage. It improves physical strength, enhances self-esteem and self-appreciation, and calms anxiousness. It promotes love for family and enhances wealth by improving the business and its legal matters.  The bloodstone also fights evil and prevents jealousy. It boosts your spirit and adds longevity. It eases a broken heart and brings good fortune. Bloodstone also enhances creativity and intuition.

It is sometimes called the martyr’s stone as legend tells that it was created when drops of Christ’s blood stained some jasper at the foot of the cross.  Generally found embedded in rocks or in riverbeds as pebbles, primary sources for this stone are India, Brazil, and Australia.

If you’re an artist who enjoys making birthstone jewelry, then this is the item for you! Instead of picking out each individual birthstone we’ve put them all together in one convenient birthstone set. You can create mother’s and grandmother’s necklaces, bracelets, and rings which include each child’s birthstone. Or make individual pieces for each month. There are so many possibilities, and your customers will love them all.

These sets come with round stones in sizes 6mm or 8mm. They will fit in most gemstone settings and snapsets so you can easily incorporate them into any piece of jewelry. Each month is represented in these birthstone sets so you can be sure you’ve picked up a stone for every month in one easy step. From January’s garnet to December’s blue zircon, we have you covered.

When you’ve picked out all of your gemstones you’ll want to be sure and look over our snapset inventory. We have many different snapsets and know you’ll find exactly what you’re looking for. 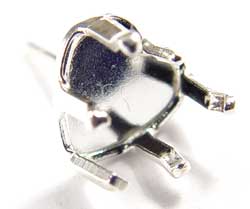 What will you make next with Aquamarine or Bloodstone! Share your pictures with us – we’d love to see them!