When we think of copper it’s usually the shiny color of new pennies or the wire we carry here at Wire-Sculpture.com or maybe it’s the weathered blue-green of the Statue of Liberty.  Unless you’ve been around raw copper as it is being mined, you probably aren’t too familiar with today’s gemstone; Cuprite (coo-prite). 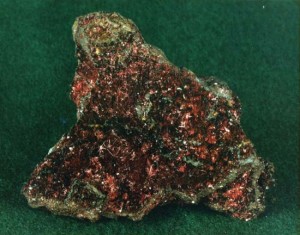 he name Cuprite comes from the Latin word “Cuprum” which means copper and is also known as “ruby copper” due to its red color. It was first identified in 1845 and is composed of copper oxide Cu2O that develops in isometric system hexoctahedral class of crystals that can be cubic (4-sides), octahedral (8 sides) or dodecahedral (12 sides). Cuprite crystals have imperfect cleavage with a brittle conchoidal fracture. 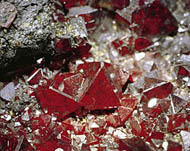 Lustrous red octahedral cuprite crystals from the Propretary Mine in Broken Hill. The largest is 2.5mm on edge. 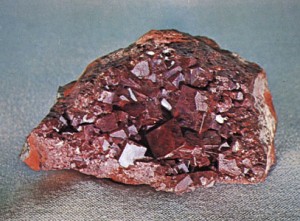 What color is Cuprite?

Cuprite is a wonderfully brilliant rare gem the color of the most expensive of red garnets and can also have a deep maroon color with a metallic luster similar to that of hematite.  The brilliance and fire of Cuprite is greater than that of a diamond, but with a hardness of only 3.5-4 on the MOHS scale and the inclination to fracture, not a very durable material for jewelry and is usually cut as cabochons and beads though it can be faceted if the stone is over one carat. 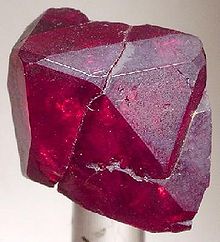 Some of the best Cuprite has been found in Southwest Africa in the 1970’s.  This Cuprite is a brilliant red and translucent.  Due to the color and quality of his Cuprite, it was in very high demand has been all but played out. Since then, new deposits have been found in Australia, Namibia, Russia, Japan and the United States. 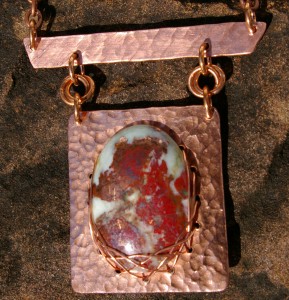 Native Michigan Cuprite wrapped cab, in a partial basket weave fashion. This Cuprite is mixed with copper and the tiny bit of green is malachite.

Cuprite is a gem of high energy that is said to help with inner guidance, can aid with fertility and helps to overcome fear.  Cuprite is also associated with the base Chakra and helps to balance the heart as well as keeping us grounded. 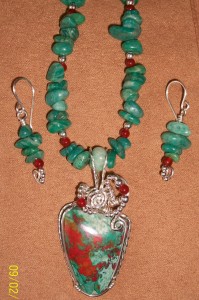 Cuprite wrapped necklace in sterling wire along with amazonite chips and carnelian accents by Shawnea Hardesty.

Cuprite, a beautiful red gem valued for its rarity, fire and brilliance comes to us from the common copper sulfide yet if not for the softness of the stone would be more valuable and desirable than diamonds.  Do you see why I love rocks?

Sometimes you can figure out a lot about people just by looking at the beautiful material that comes from a common piece of stone.  How else would you describe those who have been through the heat and pressure of life, felt like they are being swamped by the waters of tribulations; sometimes weathered, twisted and beaten,  and yet come out as some of the most brilliant of gems?  In my opinion, people are a lot like rocks, and rocks are amazing.