I ran across Titanite a few months ago when I was looking for an unusual gemstone to add to my own fledgling collection. I must have been in a green mood that day because I bought some jade, peridot, rhyolite and happen to pick up something labeled “sphene.”  At first, I thought they were another variety of color-changing stones because of the fire.  As I picked them up and took a good look, I just had to have them.

Sphene is not a color changing stone, but it does have more fire than a diamond and gives off beautiful flashes of gold and red. Titanite also comes in varying colors from a bright green, which I purchased that day, to yellow and gold for gems, with black, gray and white added for mineral specimens. 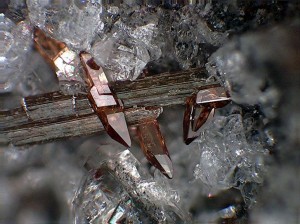 So, which is it; Sphene or Titanite?  Well, the answer would be…yes.  If you are speaking with a mineralogist, the name is Titanite, however, if you’re speaking with a gemologist then it’s Sphene. Both terms are fairly interchangeable.

How is it formed?

Titanite is formed by one of my favorite processes; metamorphosis.  The word Titanite comes from the inclusion of titanium in the chemical composition; CaTiSiO5 which translates to Calcium Titanium Silicon Oxide material.

Sphene is found primarily in igneous rock though it has also been found in limestone and schist that have been through a metamorphic process.  The name Sphene is from the Greek word sphenos which means “wedge” describing the type of crystals Titanite forms. 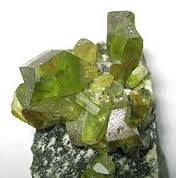 The crystals are often found in twinned clusters and the color variation depends on the type of trace mineral, like iron, is included in the crystal structure.

Titanite makes a beautiful and unusual setting with the fire and colors it presents with only the crystals showing the most clarity used as gems. It is a fairly soft stone at a 5 – 5.5 and so be careful if you set it in a ring it’s really best for pendants or earrings.

Personally, I bought two really beautiful stones that I’m using in a protective ring setting to flank a quartz crystal I purchased a while ago.  I love the sparkle and fire of the stones and the look on people’s face when I tell them, “No, it’s not a Peridot…it’s called Sphene.”

Next week we will be hearing all about Deseret Rose in our Gem Profile.  Keep reading – you won’t want to miss it!

Do you have any jewelry made with some of our featured gemstones that you’d like to share with us? Send us pictures at tips@wire-sculpture.com and they could be featured!

how to make wire jewelry with titanitetitanitewhat is sphenewhat is titanite