Just recently we talked about Mother of Pearl and the different types of mollusks or invertebrates we use for Mother of Pearl.  Last year about this time Rose also wrote an article on the historical uses and value of Pearls. This week, we’ll go a little deeper into the world of pearls and talk more about their creation, cultivation and care.

In nature, the creation of a pearl is very rare event. It is caused by a foreign object getting into the body of the mussel or oyster causing the animal to coat the object with nacre which creates a pearl. Man has taken this process to the next level by cultivating pearls within the oysters on farms. These farms are located in saltwater bays where the oysters live on ropes which are hung below floating docks. The temperature of the water is monitored constantly and the oysters are raised and lowered to keep them at the correct temperature at all times. They are also fed an optimum mixture of algae and nutrients to keep them healthy.  Once a year, they are pulled from the water, their shells cleaned and treated with anti-fungal solution and put back in the water to finish growing. 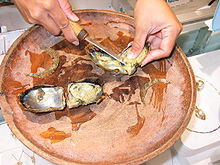 A pearl being extracted from an Akoya pearl oyster.

Millions of oysters are nucleated every year with surgical-like precision, but only a small percentage actually create a pearl with many succumbing to disease or environmental problems like red tide, or too much freshwater being trapped in the bays.

It takes between 10 – 18 months to develop a pearl, the longer the oyster is left in the water, the larger the pearl becomes.  Each year only about 20% of the oysters actually create pearls suitable for market.  Today there are nearly 2000 oyster farms in Japan creating these beautiful gems using the method developed over 100 years ago. 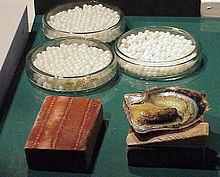 South Seas Pearls are another type of saltwater pearls and are created in the white-lipped Pinctada maxima oyster. These pearls grow over a 2-3 year period and are exceptionally beautiful and rare.  The Pinctada maxima  is a wild oyster that is collected by pearl divers in water ranging from 10 – 80 meters deep.  Some divers, like those in the Philippines, don’t use any equipment opting to “free dive” for the mature oysters.  Once the healthy oysters are found, they are isolated in bays, nucleated and then placed at the bottom of the bay to grow.  After several months, the Pinctada maxima  is x-rayed to make sure the nucleus has not been rejected.  If the nucleus is still within the shell, the oyster is then placed back in the bay for 2 -3 years while the pearl forms.  Once a Pinctada maxima has developed a pearl, a farmer will carefully remove it and insert another nuclei. Healthy Pinctada maxima can be nucleated up to 4 times over its lifespan.

Another type of pearl is the Tahitian pearl which comes from the black lipped Pinctada margaritifera.  These are large oysters, almost twice the size of those used in Japan, and produce dark-colored pearls, often known as “black pearls” with an almost metallic luster.  These oysters are raised on farms from youth through maturity and then are cultured in the same manner as South Seas pearls. 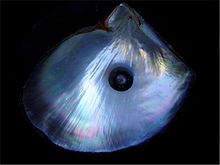 A black pearl and a shell of the black-lipped pearl oyster. The iridescent colors originate from nacre layers.

Freshwater pearls are cultivated in much the same way as salt water pearls only using freshwater mussels instead of oysters.  Many archeological sites throughout the Mississippi River basin and the Eastern United States have yielded evidence that the native inhabitants valued pearls for adornment and even trade.

There is a record of the explorer Hernando Desoto in the 1540’s describing the Native Americans as wearing pearls “as big as filberts.” The “queen pearl” was discovered in New Jersey in 1857 and is a large pink, perfectly round pearl from a freshwater mussel. This pearl was eventually sold to the Empress of France.  Quite the reputation for a lowly little river mussel!  Over the next several decades, freshwater pearls were harvested and sold, nearly decimating the population of mussels in the rivers and lakes of North America. 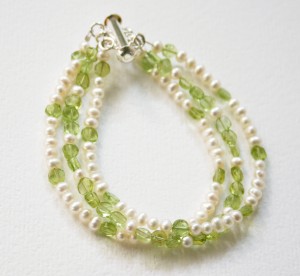 The best of  both worlds:

Much of the production of freshwater pearls was originally in the United States and Scotland, but when Kokichi Mikimoto began experimenting on the nucleation process, the production quickly moved to Japan and Lake Biwa. Through decades of trial and error, Mikimoto discovered that the best material for the nucleation of saltwater pearls is a piece of freshwater mussel shell and the best freshwater mussels come from North America.

Today, the production of freshwater pearls and shells in North America is undertaken by over 30 farms in various states, the first of which was the Latendresse farm in Tennessee during the 1960’s.  Now these farms not only produce American freshwater pearls, but shells for nucleation of saltwater oysters.  So literally, the beautiful salt water pearl you are wearing from the South Seas or Asia has a bit of North America inside it. 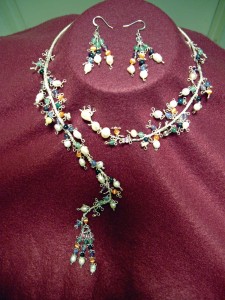 Pearls are not only beautiful, but delicate as well.  Our skin contains oil and acids that can degrade a pearl and change not only its luster, but its shape over time.  When taking off your pearls, wipe them with a soft cloth to remove the oil and dirt from your skin. Never wear your pearls when exercising and always store them in a pouch or jewelry box, don’t hang them to store.  If you need to wash your pearls, only do so with a mild soap, not detergent, and use a soft cloth to dry them, don’t wear until the thread is completely dry.  NEVER place pearls in any type of ammonia or vinegar solution, ultrasonic or steam cleaners, or use any type of abrasives like a toothbrush to clean them.  Remove your pearls to apply makeup, hairspray or perfume as the acids can degrade and ruin your pearls. If you wear your pearls often, it’s a good idea to have them restrung every year or so.

Pearls, we learned from Rose, have been valued throughout history for their beauty and rarity. Cleopatra was said to have won a bet with Mark Antony by dissolving a pearl in wine and drinking it; proving that she could consume the wealth of an entire nation in one meal.  Pearls have been found in ancient burial sites and were even worn into battle by knights who thought the gems would provide protection.  Pearls were also a large part of the expansion into the America’s by the European’s whose lust for the beautiful gem nearly caused the extinction of the American saltwater pearl oyster.

For nearly 200 years, pearls were available only to those who were royalty, wealthy or famous. Pearls were so valuable that in 1916 when Jacques Cartier opened his store in New York City, the property was purchased with two strands of pearls. 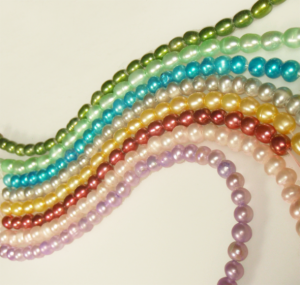 Today, pearls are accessible to more people of diverse economic backgrounds due in large part to the cultivation of pearl oysters.

Next week, we hear about the very beautiful and quite rare Zultanite!  It’s color changing properties are amazing!

Have you made jewelry with Zultanite that you’d like to share with us? Send us pictures at tips@wire-sculpture.com and they could be featured!