This week I think we’ll start with a road trip!  We’ll be “leaving on a jet plane” destined for Whitby England, which is on the Yorkshire Coast. There we’ll be visiting the W. Hamond Boutique which has been in business since the 1860’s selling a stone that Shakespeare described in Henry VI as “Coal-black as Jet.” 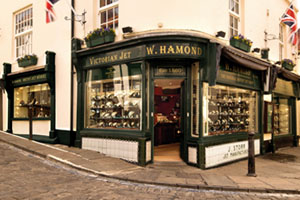 Whitby is a typical English fishing town complete with cobbled streets, quaint shops and a beautiful Abby that overlooks the village. If you walk along the beach, you may notice some spots in the cliffs where holes have been dug out, filled in, or eroded away. There are also portions of the cliffs where large sections or lines of black rock are noticeable against the grey of the shale. These sections are called a “jet line” and are where our gemstone story really begins. 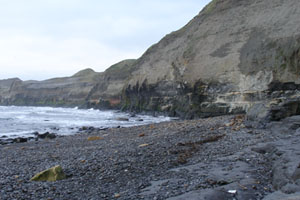 A distinctive shale or ‘Jet line’ on the cliff face. Photo courtesy of W. Hamond.

Millions of years ago, during the Jurassic period, carboniferous forests grew in this part of England.  One of the most prominent trees was one similar to our modern day Araucaria, or Monkey Puzzle tree. These large trees would either die and get washed into the sea, or be carried to the sea during violent storms where they would become waterlogged and sink to the bottom of the ocean not far from shore.  As the millennia passed, silt and sand encased these logs, compressing them into what is now known as Jet. 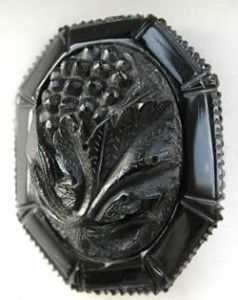 Jet is a form of Lignite, which is a variety of coal.  Jet, though considered lignite, is more dense than common lignite, and though soft (2.5-4), can take a nice polish. Jet is found throughout the world in various areas, but the Jet from the area of Whitby, England specifically, is a true black jet with few inclusions, and can be easily worked on a lathe or in carvings.

Jet has been known throughout the European Region for centuries with early specimens being found in Germany dating around 10,000 BC, and Spain from around 17,000 BC.  The Romans were very familiar with Jet, calling it Gagat, and made beads, buttons and carvings that have been found in and around Whitby. Jet was also used by Bronze Age people for carvings, beads, bracelets, rings and amulets.  Anciently Jet was thought to ward off evil spirits and protect its wearer from harm.  The monks in the Abbey also used Jet to carve rosaries and other ornamental items. In more recent times, even Shakespeare was familiar with Jet and referenced it in several of his plays and sonnets.

Jet gained popularity during the Victorian Age when it went on display at the 1851 Great Exhibition in London where it came to the attention of several members of royalty in Bavaria and France. It wasn’t until Queen Victoria took to wearing Jet as part of her mourning jewelry when her husband Prince Albert passed away, that Jet really became popular. 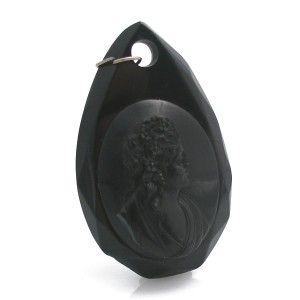 Jet, though dense, is soft and light therefore it can be carved in intricate patterns without losing the integrity of the stone and takes on a beautiful sheen when polished with rouge.

Now that I have you interested in the beauty of Jet, let’s go back to the W. Hamond shop and museum.  Here you can tour a Victorian Jet workshop that was found in a boarded up building in town, speak with the workmen and even purchase some beautiful specimens of Jet either in rough or in settings. Though the government has never allowed actual excavation or mining of Jet, Victorian Age workmen would find the Jet, excavate it from the cliffs and then fill in the rock afterwards. They would even pick up loose pieces from the beach.

A “little” piece of history:

W. Hamond is the proud owner of the largest Jet gemstone known; at 21ft in length and 180 million years old, it is truly a marvel of nature and a piece of history. 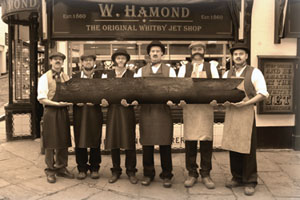 *A special thanks this week goes to the W. Hamond shop for the information provided to Rose at Tucson this past year, and to Chris Sellors specifically.  For more information on Whitby Jet, please follow this link to the W. Hamond site where you can not only take a look at their products, but also the history of Jet and some wonderful pictures of Jet from excavation through the finishing process.

Next week, we will discuss crystal – lead vs. mineral! We will be talking about the “Colors of Liberty.”

Have you made jewelry with any type of Crystal before? Send us pictures at tips@wire-sculpture.com and they could be featured!